Lane will be offering summer enrichment classes and workshops on a variety of workshops for grades 6-12. Check out our course catalog to learn more and sign up!

Lane Tech is a large, coeducational seventh through twelfth grade public high school, offering students a college preparatory curriculum, with particular emphasis placed upon the technological aspects of a modern education. Since its beginning over one hundred years ago to the present, Lane has been a leader among the most outstanding educational institutions in Chicago. Lane Tech opened as a manual training school for boys until the 1930s when its mandate was changed to that of a college preparatory school. The current building, situated on a beautiful thirty-acre campus, was opened in 1934. In September 1971 female students entered Lane’s doors for the first time. Today they make up roughly half of the student body and have helped maintain Lane’s “Championship” tradition. Continuing the tradition of excellence, in September 2011, Lane established a six-year Academic Center program and moved from a ninth through twelfth grade program of study to a seventh through twelfth grade program of study. Lane’s fine reputation is the result of a long history of dedicated school leaders, instructors, outstanding students, diligent parents, and the support of the community.

Lane Tech is the largest high school in the city with more than 4,200 students representing all races, creeds and national origins. The faculty is made up of more than 250 professional educators. Over 100 additional staff members contribute to the operation of the building and its services.

Lane enjoys a tradition of both academic and athletic excellence. Throughout the years, its teams, both boys’ and girls’, have won more than 500 city championships. The title “School of Champions” is nowhere more fitting than at Lane Tech.

Located on Division and Sedgwick, the Albert Grannis Lane Manual Training High School opened in September 1908. The school was formally dedicated on Washington’s birthday, February 1909 and is named for Albert Grannis Lane, Chicago Superintendent of Schools. As industrial education’s popularity continued to grow through the years, and Lane added many new courses to its curriculum, Principal Bogan recommended that the school’s name be changed to reflect all of the courses offered. In 1909 the school became known as the Albert Grannis Lane Technical High School.

By 1915 the school was in full swing. The building was in almost constant use. Carpentry, cabinet making, and wood turning were offered to first year students. Sophomores were given extensive training in the fields of foundry, forge, welding, core making, and molding. Juniors worked in the most popular shop, the machine shop. It was equipped with 80 machines and 60 lathes cast and built at Lane. Seniors were given the most advanced shop, the electric shop. There they built motors, generators, transformers, and other instruments. Other classes, such as art, classical architecture, drafting, and English were offered to develop students’ communication skills. The print shop was the best equipped high school print shop in America. It was equipped with the newest and most advanced equipment of the time. Its jobs included the 4 page Lane Daily, the 56 page monthly Tech Prep, and the annual 200 page yearbook plus other out of school jobs. At this time, Jack T. Nelson, a student, felt it was time for Lane to have a school song. He wrote the words and music of “Go Lane Go,” making Lane one of only a handful of schools with an original school song.

In 1929 a comprehensive music program was established at Lane. Chicago Symphony Orchestra director Frederick Stock and Superintendent William Bogan worked together in making up the new curriculum. By 1930 Lane had grown to a population of 7,000 students. To relieve the overcrowded conditions at the school, it was decided to build a new Lane Tech. Board of Education architect John C. Christensen began preparing plans for the world’s foremost high school complex. On June 24, 1930 groundbreaking ceremonies took place at Western and Addison. The new building was a beautiful combination of function and art. Like the old Lane, it was designed to allow the teachers and pupils to work in a comfortable environment. On dedication day, September 17, 1934, 9000 boys marched from Cubs Park to the new school. Lane’s new population required many new provisions. Classes had to be staged in three shifts, and commencement exercises were held at the International Amphitheater.

World War II provided Laneites with many opportunities to show the ideals of Albert G. Lane and his school. Many war drives were carried out by Lane students. These drives provided the war effort with four Red Cross ambulances, a B-17 Flying Fortress, and over 3 million dollars in war bonds. Lane’s 50th anniversary in 1958 brought a very important change to the school. America, fearing the Soviet space supremacy, became preoccupied with establishing a sound space program. To aid in the education of scientists and engineers, Lane assumed a closed admission policy. The school dropped its remedial courses and took only the students that would make the greatest contributions to American science.

The year 1971 brought the most noticeable change in Lane’s history. The Board of Education approved Superintendent James Redmond’s recommendation to admit girls to Lane Tech. He cited a drop in enrollment and the lack of a technical school that admits girls as reasons for the change. The school was in a turmoil after this decision. Fifteen hundred Lane boys protested at the Board of Education. The general fear was that the school’s quality would drop and within a few years Lane would be just another high school. Actually, the school’s overall academic quality improved with the addition of girls.

Lane holds deeply to traditions established 90 years ago. Maintaining its high goals and ideals, Lane retains the majority of all athletic championships, many Illinois High School Association titles, and has a college attendance rate of 85%. Its music program has provided the Chicago Symphony Orchestra with many players. More Ph.D’s have graduated from Lane than any other high school in the nation.

Lane Technical High School’s performance in the last 90 years has surely proven the honor in proclaiming “I am a Laneite.” 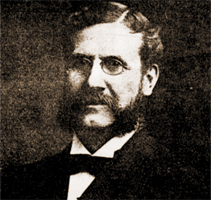 Born in a small, modest home in 1841 on what is now the corner of State and Van Buren Streets, Albert Grannis Lane made a permanent impression on Chicago and its people. Imbued with a strong work ethic, Mr. Lane took his first job at the age of seven.

Through his initiative and hard work, Albert G. Lane earned an appointment as the principal of the Franklin School just after his graduation from high school. Thus, at the age of seventeen, he became the youngest principal in the history of the Chicago Public Schools system. In 1869, Mr. Lane became Superintendent of the Cook County schools where he made many innovations to improve the quality of the public schools. During his long career, Mr. Lane also served as Superintendent of the Chicago Public Schools and President of the National Education Association.

Mr. Lane’s most cherished dream was the creation of a large high school dedicated to providing students with hands-on experiences in technical education while developing and enhancing their academic skills. Lane Technical High School is the realization of that dream.

Lane Tech is proud to be one of the few high schools in the nation with an original school song. “Go, Lane, Go!” was written by Jack T. Nelson, in 1915. Jack was an extraordinary student, assistant conductor of the Lane Orchestra, manager of the Glee Club and an accomplished musician. Upon entering Lane, he became aware of the need for a school song and set out to write one. The results were met with deep enthusiasm. Its’ first school appearance came at a football pep rally. The twenty-one hundred excited boys listened intently as the Glee Club sang “Go, Lane, Go!”. The new song was greeted with overwhelming approval, but had yet to be performed in public. Its’ debut came on December 15, 1914 at Saint Alphonses Athenaeum with the Mask and Shears’ presentation of “The Day of the Race”. The impressed audience resounded with the chorus: Go! Lane! Go! Its’ great success marked the song as Lane’s forever.

Go, Lane
For we are here to cheer for you,
Go, Lane
To you we’ll e’er be true.
Be fearless and bold for the Myrtle and the Gold,
Add laurels to our fame
(Go, Lane, Go)

(Hit `em high! Hit `em low!)
Go Lane Go!
Go, Lane
For we are here to cheer for you,
Go, Lane
to you we’ll e’er be true.
Be fearless and bold for the Myrtle and the Gold,
Add laurels to our fame
(Go, Lane, Go)

The Lane Tech Memorial Garden is located in the inner courtyard of the building and is dedicated to students who have lost their lives in defense of our country. At the west end of the Memorial Garden is the Ramo I. Zenkich Memorial, consisting of a flag pole and granite monument inscribed with the names of the students from Lane Tech who lost their lives in the Vietnam conflict. 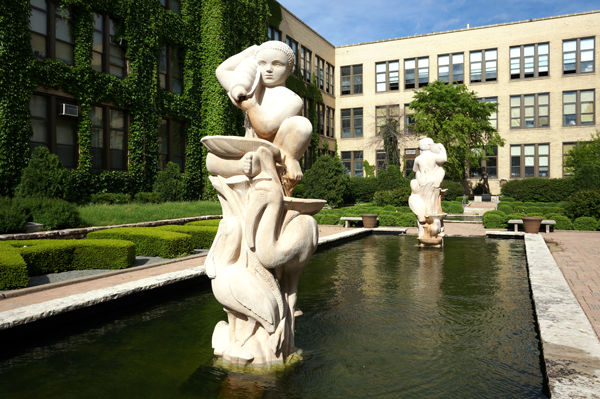 At the center of the Memorial Garden is the large rectangular-shaped pond with two WPA-funded statues by the sculptor, Charles Umlauf. These two cast-stone fountain figures, called “Boys with Sea Forms” were completed in 1941 and complement the Memorial Garden’s aesthetics.

To schedule a mural tour, contact Katherine Nester at KLNester@cps.edu

Be a part of history! For the first time ever, a book celebrating the murals of Lane is being produced. Help us ensure that 100% of proceeds can go to the preservation and restoration of the works. Donate today in support of publishing expenses. No amount is too small.

The magnificent art that beautifies Lane Technical High School is the largest and most comprehensive collection of any school in Chicago, the Midwest, and perhaps even the United States. These historic works of art, 66 murals and two cast-stone fountain figures, date from two phases in the school’s history. Some were commissioned in 1908 by the Chicago Public School Art Society for Lane’s first building at Sedgwick and Division streets. Others were created during the Great Depression (1929-1942). These include murals from the Century of Progress (1933-34), given to the school’s new building at Addison Street and Western Avenue, and site-specific artwork authorized by the Works Progress Administration/Federal Art Project (1932-1943).

This nationally recognized collection is valued for its aesthetic qualities, historic importance, and political perspectives. It offers students, teachers, and visitors an exciting visual experience while providing lessons about the art and history of 20th century America.